Do you have a story to tell or do you know someone who does? The Old Orchard Beach Historical Society's Oral History Project is seeking interviewees willing to share their past and present experiences as members of our community. To date, over twenty people have been interviewed and the results are available to the public in the research room of the Harmon Museum.

Oral history is the collection and recording of living people's accounts of their own life experiences. During an oral history interview, the oral historian records these accounts (through written notes and sometimes audio and video recordings) and attempts to place them in an accurate historical context for use by future generations and later scholars. Be a part of this important and exciting project!

The 1907 Fire Society invites like-minded people (those with a love of the Fire Service and the preservation of artifacts, equipment, fire egines etc. ) to join its group.  FMI contact Arthur Guerin by email or in writing to: 1907 Fire Society, P.O. Box 65, Old Orchard Beach, ME 04064.

Where Did My Old Orchard Go?

A personal essay by S.J. Quinlan

Has anyone seen my Old Orchard?  No, not the beach and seaweed part by the Atlantic - I'm missing the Old Orchard that was down at the foot of Old Orchard Street and swung around on East Grand Avenue for about one hundred yards. When I went back to see it the other day, it wasn't where I left it back in '68. In fact, not only was it gone, but there was this great big gray and white monolith standing in its place. Somebody told me it's been missing forty-odd years. It's time to get it back!

I don't know if someone took it or it just ran away, although I heard a rumor that it could do a disappearing act on its own. Someone said he heard that one night it blew up a smoke screen and when people went to see it the next morning, it was gone, just leaving behind a campfire of sorts.

It'll be easy to recognize - you'll know it when you see it. It's big and bright and brassy, and you'll certainly recognize its smells. First, look up about fifty feet and you should see a brightly colored Noah's Ark, with its greens, reds, oranges, and yellows glaring at you, even at night. Then look for all the folks, animals, and doodads hanging off it, including Noah himself. Oh, and listen for the whistle, horns, and hisses coming from the boat.

Keep looking up, to the left of Noah's Ark. You should recognize the Jack-and-Jill slide. It sort of makes a definite cranking noise of its own and it is lit up like Ralphie Parker's Christmas tree in A Christmas Story. You might even hear screams of the folks who were just dumped out of the little sidecars and are heading down its curly-cue fun 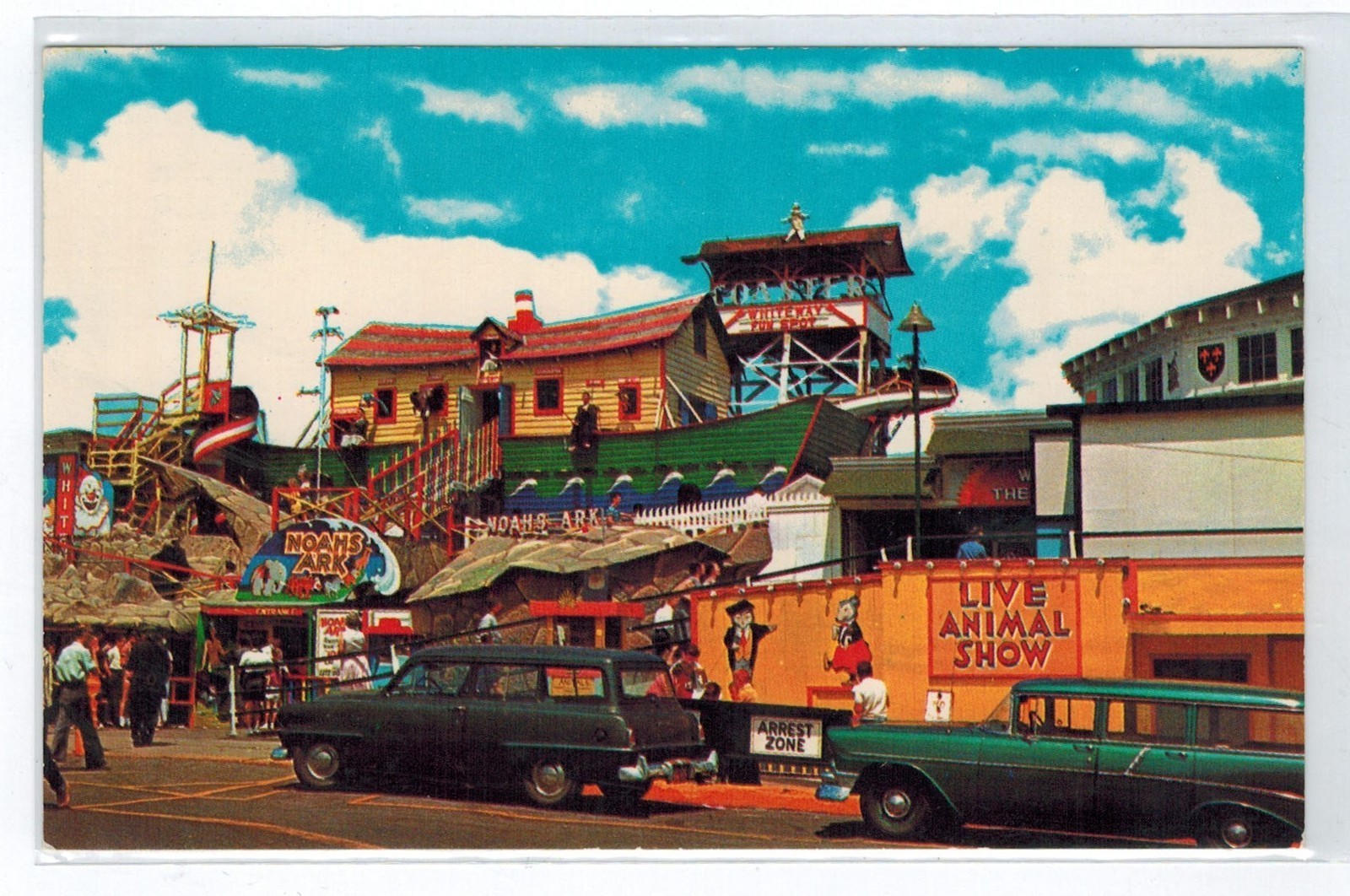 And another thing: underneath all of this is the Coal Mine Ride and its donkeys. They're missing, too. Even though this part is kind of dark and has lots of scary noises, you can't tell me that you won't know THAT smell!

Then there're the Dodgem cars. They should be right on the the corner of the whole block. You can't miss the dozen or so of the brightly colored, stubby little vehicles without visible wheels. They do have beady little headlights that seem to blink like they have a piece of sand in one of their eyes. Look for their long vertical tails that scrape along a metal screen ceiling up above. You'll probably hear the bangity-bangs as friends and relatives deliberately smash into each other to their heart's content.

Looking toward the front of my Old Orchard, you should spy a merry-go-round. You can't miss it, with its gaudily decorated, hard-charging "flying horses," stationary horses awaiting their turn to blast forth, and high-backed benches for the less-adventurous folks. Between the flashing lights, the calliope music, and the crash of cymbals, you'll know it's the real McCoy.

I have to tell you, though, I've been looking everywhere for my Old Orchard. Not even Johnny Cash has been to more places than me in my searches. I've been to Milliken Mills, Cascade, Halfway, Ocean Park, and twelve campgrounds. I even searched the Scarborough marshes, Pine Point, and Camp Ellis. Still, I came up bupkus.

I decided I needed more help. I figured that with Maine being so far north, I would first ask Sergeant Preston of the Yukon for assistance. He said he wouldn't help me because he and his dog Yukon King didn't like the summer heat and most of the motels are closed in the offseason. Then I asked the Old Orchard Beach Police, the York County Sheriff, the Maine State Police, Inspector Gadget, Lieutenant Colombo, Charlie Chan, Spencer and Hawk, the FBI, and NCIS to look for my Old Orchard. There were zippo results.

So, here's the deal. If you should be the one to find my Old Orchard, let me know. I'll be the old white-haired guy walking on the beach, carrying a magnifying glass, and wearing a Sherlock Holmes hat. If you find my Old Orchard, I might even tip you a couple of Palace Playland tickets.

Members of the Old Orchard Beach Historical Society are currently researching the history of churches in Old Orchard Beach, with a goal of producing a book on the subject.  In particular, we are seeking information about St. John's-By-the-Sea Episcopal Church, the Second Advent Christian Church, and the Sovereign Grace Baptist Meeting House.